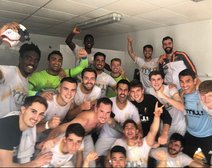 Round 27 Summary , ACFC back to winning ways

Big wins for both the first team and under 19's and a closely fought draw involving the Under 23's indicates a strong end to the season us ahead .

Igna Aznar Ortega got the first team off to a flying start with a goal in the first 3 minutes away at local rivals CD El Campello with further goals from Samu Sanchez Compan and Guille Saldana Moreno helping City to a 3-0 lead with just over 15 minutes gone. Jorge Esteve Amor rounded off the scoring in the 52nd minute with another clean sheet for the 3rd tightest defence in the league.

An important draw for the under 23's who have been on the receiving end of some terrible luck in recent weeks with Emmanuel Ogundare getting ACFC off to a strong start with a goal in the 11th Minute. A goal 10 minutes after the break let Mutxamel CF 'B' back into the game but a string of fine saves from Ben Pedley denied Mutxamel the 3 points in a game that could have gone either way .

The under 19's put their previous weeks loss against top of the table CD Barrio Obrero firmly behind them with a massive 6-1 win at Racing Playa San Juan C.D. Another 11th minute goal from Ruslan Gazizov sending City into the lead with Eshak Belhous added a quick fire double in the 20th and 23rd minutes and city went into the break with a comfortable 3-0 lead . Racing pulled one back in the 62nd minute. Tayeb H'mida put the game beyond any doubt in the 68th minute before Mahfoud Sarrio got his first of the day followed by a very cheeky penalty to round the game off 12 minutes from time.

A very solid weeks showing from all 3 teams and we're all looking forward to next round 28 !